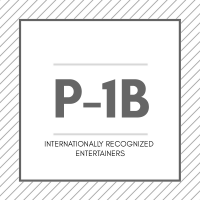 Are you planning to enter the United States to perform as a member of an entertainment group that has gained outstanding international recognition?

What is an internationally recognized group?

The entertainment group must have gained international recognition and retained such recognition for at least one year.  It is the reputation and the level of skills of the group as a whole, which must be recognized internationally. Therefore, the achievement of the individual is not considered when determining the group’s recognition. A waiver may apply to national groups which have acquired outstanding recognition for a substantial period of time.

The U.S employer files the petition on behalf of the entertainment group and will have to submit the following documents with the petition, among others:

The P-1B visa is issued for a period not to exceed one year and can be extended in increment of up to one year to allow the entertainment group to continue or finish its performance in the United States. If the group receives a new employment offer with a new employer, it must wait until the new petition has been approved before it can start working with that employer.

Do Support Workers who are essential to the group qualify for P-1B?

Support workers who are an integral part of the group performance can qualify for a P-B1 visa so long as no U.S. worker can perform the way these support workers perform.

At Scott Global Migration Law Group, we provide solutions to your visa needs.